We Have A Building Committee!

I first met Tom and Julie when they attended one of our holiday public hours here at Refuge Farms. "Julie is the horse person," Tom told me as Quarter Horse nudged at his elbow. I enjoyed them both - Tom with his twinkling eyes and Julie with her ready smile. 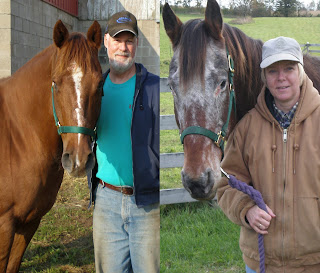 It wasn't long and that very same Quarter Horse went to live with Tom and Julie. As Tom's horse, no less! TR joined Quarter horse as Julie's horse. And I rested knowing that those two horses were set for life. When Tom and Julie adopted a horse it was a lifelong commitment. And the horses were lucky. Daily brushings. Good hay. Clean water. And their choice of shelters in the winter.

Not long after that, more horses were added to their barns on a foster basis. Some of the worst went to Tom and Julie. Horses that I thought may not pull through. Horses like "The Camp Mare."

When I delivered "The Camp Mare" it was brutally cold already in November. And this little mare had no meat on her. None. Her coat was long and curly and matted. Her head hung in weariness. And her little legs could barely hold up her little body. Neither Tom or Julie batted an eye. They welcomed The Camp Mare. Began their daily routine with her. And cared for her.

The following summer I stopped at their farm to see them and as I drove up their driveway, I noticed a new horse in their pasture. Good for them! They had added to their herd. Later, as we walked to the barn to see Quarter Horse and TR, I found out that the new horse was The Camp Mare! Oh, my! Her head was high! Her coat was sleek. Her tummy was plump. And she had spunk and spirit! Oh happy day!

So when Tom asked to talk to me about something, I figured it was an adopted horse or something to do with one of the foster horses they currently had in their barns. But nope. Tom wanted to talk buildings. Or lack of them. At Refuge Farms. And when Tom talks about buildings, I listen. The man has been in the industry for years and he knows of what he speaks.

His plan? To create a Building Committee and work on some of the obvious needs for facilities. Tom and Julie saw plainly that I put the funds into things that breath. But that the buildings would soon be limiting our abilities to rescue and support the horses in our care. Wisdom, is what they call that.

Would I object, he asked? Could he begin a Building Committee and work on a hospital where the old barn stands? A hay shelter and an office where the hay pad now sits? Would that be acceptable to me?

I had all I could do to stand still! YES! I knew we needed new buildings and work on our existing buildings but my mind isn't built to work like that. And again, my heart is so focused on the horses! YES! That would be more than acceptable to me, Tom! Please, do!

The very first thing Tom and Julie did was to "put their money where their mouth is", as they say. They donated some of their delicious, tasty, organically grown beef to a raffle. Linda and Jim J. of Eau Claire jumped on board, as well, and donated a basket of tasty snacks and brews as well as a gift card to Applebee's. The stage was set and the first ever Building Fund Raffle was announced!

Tickets were distributed and the volunteers of Refuge Farms came through. Tickets were sold, funds were gathered, and the date of the drawing arrived. Tom did the honors of drawing the winning names and he did so in high fashion, don't you think? 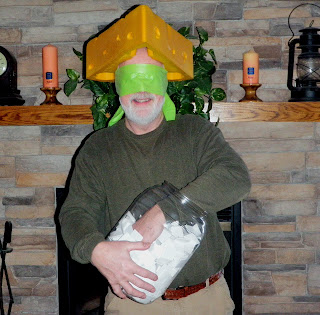 On January 31st, 2011 the drawing was held and the winners were announced. They are:

4th Prize - The $50 Applebee's Gift Card was won by Ron B. of Chippewa Falls, WI. Happy eating and congratulations, Ron!

3rd Prize - The Tailgate Basket of tasty snacks and brews was won by Toni P. of Spring Valley, WI. Sure hope that made the Super Bowl even better, Toni!

The raffle was a success for all of the winners and through the effort, a grand total of $2,530.00 was raised for seed money in the Building Fund Savings Account. Miracles and more miracles! A savings account that never existed before and now, with a balance of over $2,500.00!

Tom wrote: "I would like to extend my sincere thanks to al the volunteers who stepped up and made this raffle possible, and to all the people who purchased raffle tickets in support of Refuge Farms."

I would like to add my thanks to all of you who bought a ticket. To all of you who sold tickets. To Linda and Jim for donating the Applebee's Gift Card and the Tailgate Basket. And a special "Thank You" to Tom and Julie.

For stopping by Refuge Farms that day to walk into our barns. For adopting our horses. For fostering our horses. And for seeing the need and stepping up to help fill the need.

But with a Building Committee and Tom leading the effort, there will be energy and ideas and accomplishments. And dreams will come true. There will be a hospital. And then our little Gracie will be able to stay home with us! And others will be able to be supported and healed that otherwise would be beyond our capabilities.

Great things begin with single ideas. And I'm here to tell you, great things are beginning around this humble little parcel of land so far up on a hill!

Enjoy the journey of each and every day,
Sandy and The Herd

A Portrait of a Laddee

Read on! Enjoy Sherri's word and her creation. And just imagine her art glistening in the sun on a summer day!

I think I have finally gotten this to a good stopping point. It took a few days of living with the original version to decide on what the background should be. 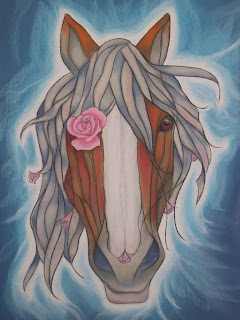 Whether to have a background or not was the first question and secondly was how to render it. The great part of making art is the magic..... starting with a nub of an idea and finding it takes you some place you didn't know was going to exist as the outcome. My solid blue background suddenly didn't seem as exciting as her aura! After days of "thinking" about what to do, it took just minutes to let the real solution present itself.

Sandy Gilbert and I have had emails back and forth as we have discussed Laddee, her voice, and how she was influencing how this was going to turn out. With Sandy's knowledge and input of the fine Laddee, there was some tweaking so I could get it! We finally arrived on the notion that this version is her "other side" portrait where she is restored, happy and healthy.

Another Posting on Sherri's Blog!!! 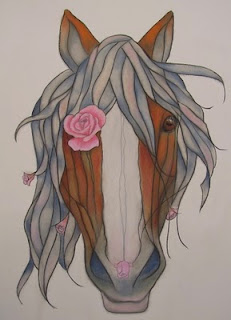 The abstract version of M'Laddee is nearing completion. This piece is one of my "stained glass" paintings. It's part pastel portrait, fantasy art, and study for a stained glass pattern.


The second version is a more impressionistic portrait, also in pastel. 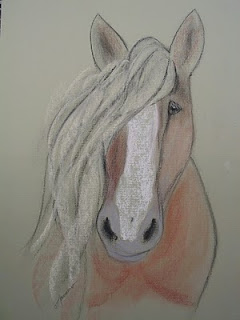