One of our long-standing volunteers is Colleen B. of Eau Claire, WI. You may recognize that name from our winter newsletter. Yes, this is the same woman! Colleen is the recipient of the 2011 Frances Andrew Award for her continual and unwavering work on behalf of all animals - horses, dogs, cats, and even turtles. We treasure her commitment to our Missions and her ready smile. Plus, at a second's notice, this woman will change any and all plans to nuture or rescue. No one needs ask. It is her nature to save the tiniest of lives. 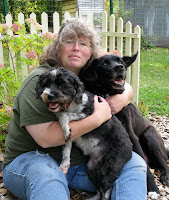 I've known and worked in this brutal world of rescue with Colleen for many years now. My respect and admiration of this woman caused me to ask her to write the following entry. And so, this blog is authored by Colleen and it tells you of the cloudy, cool, and windy day when we hosted Progress Days #2. Progress Days is an old tradition here at Refuge Farms. We gather together and review the TO DO LIST of tasks needing to be accomplished after the winter season. It may include cleaning the stock tanks, opening the end doors of the big barn, retrieving the Memory Benches from the old barn for cleaning and placing them on the grounds. It may also include mucking barns and a whole host of other tasks that sit and wait over the winter for these days of work we call Progress Days.

On this particular day in the early Spring of 2012, a crew was busy working on cleaning the pond for the season. Another crew was tackling the relocation of a burn pile of sticks and leaves. And yet another crew was busy cleaning out the corral shelter and paddock area. The corral had housed over twenty horses that spring and so it was in need of a good "down to the dirt" cleaning. What we weren't expecting is what happened! Read on and see how even cleaning a barn here at Refuge Farms means saving lives!

For the past several years, kittens have been appearing at Refuge Farms. In fact, if you review our old blogs, you’ll see we did a story about three kittens in the January 31, 2010 blog.

There is a feral (wild) long-haired black and white cat that comes to Refuge Farms to give birth in the barns. Being wild, she is not seen very often at all. It’s only when her kittens are at the age of five to seven weeks and she starts leaving them for longer periods of time, that they’ll then become hungry and more adventurous and will start crawling out and we discover them. At this point we only have a small window to try and live trap the mother in an attempt to spay her. But she’s very smart and cunning and so far has evaded our attempts.

This spring, as time went by and no kittens appeared, I was getting optimistic that she had moved on, or perhaps, had stayed at whichever neighboring farm we assume she must be from. But on our last Progress Days #2, all that changed!

Volunteers were cleaning out the shelter building in the corral, pulling out a winter’s worth of old hay and muck. And in the corner of this hay were three 3-1/2 week old kittens! There wasn’t an option to leave them, as the shelter was being cleaned. Besides, with all the commotion, the mother would most likely move them, and then in the coming year there would be three more wild cats out there having even more litters!

So I loaded them up, took them home, fed, burped and made them go to the bathroom (yes, with baby kittens you get to do this – such fun!). Then I grabbed my live trap and came back to THE FARM knowing that once again we only had a small window to catch the mother cat.

And sure enough, the next day Sandy caught glimpses of that mother cat, and would hear her calling for her kittens. But the first night she avoided the trap. The second night, she tipped it over to make the food run out the side – and she ate it all. Yes, she is tricky! I figured after two days our “window” had past, and she would soon leave again (until she came back with her next litter. Yikes!).

But on the third night Sandy staked and weighted the trap down, and lo and behold, the following morning, momma kitty was in the cage! Yes, we got her! To anyone familiar with TNR (Trap-Neuter-Release of feral cats), you know how big this is! Momma kitty was whisked off to Dr. Brian's office and her spay surgery was performed. Then she was put in a big dog kennel for several days in the old barn where it is quiet and peaceful. Sandy would briefly visit just once a day to deliver food and water. And once she was better, she was quietly released back into the wild. And the best part is now she will never have kittens again!

But as far as these current kittens, I cared for them the first week, bottle-feeding each one of them about every four or five hours round the clock. And they are so adorable at this stage – barely crawling around, beautiful little blue eyes, soft, little high-pitched meows. We named them Violet, Victor and Vinnie. Violet and Victor have the brown striping with white accents, while Vinnie resembles mom – long haired and black and white.


After the first week, Sandy took them back to Refuge Farms and she has been caring for them ever since. And we partnered again with Dr. Brian’s office to find them homes. He and his office staff belong to P.A.W.S. - Protective Animal Welfare Society of Western Wisconsin and they put the kittens on the Petfinder website in attempts to find them homes. And it’s working – Violet has already been spoken for, and when she’s old enough at 8 weeks, she will go to her forever home!

But Victor and Vinnie are still available for adoption! At THE FARM, they are getting much love and attention by Sandy, of course, and by the various people who stop and visit. The other day a tour of children were there, and the kittens had a ball, as did the kids, I’m sure, playing in the grass and crawling over everything and everyone!

Victor is the vocal one of the bunch, and when given the opportunity to explore, he takes it! He loves to wander about, playing and jumping on his toys. As he grows, he is becoming the leader and the caretaker. Not one to shrink from the bigger cats, he loves to play with Opey-Dopey's tail!

Vinnie is more laid back, content to sit on a lap and just look around his world. But he will often join his brother for a good game of wrestling! Vinnie purrs when you simply look at him. He's a lover, that's for sure.

Both are wonderfully sweet, and purr and cuddle when petted. And surprisingly, at this young age, all three of them already respond to the sound of their names and come when they are called!

If you or someone you know is interested in adopting one of these little guys (or both!), please contact The Baldwin Veterinary Clinic at 715-684-3218 to fill out an application. Or, contact Sandy at refugefarms@hotmail.com if you’d like more information about them. Their pictures and information are also on the PAWS website at http://www.pawswi.com/ .

Once they are eight weeks old, or around June 22, they will be ready to live with their new families. And Refuge Farms will once again have “Saved A Life”. Well, Maybe Three!

Submitted with loving care,
Colleen B. 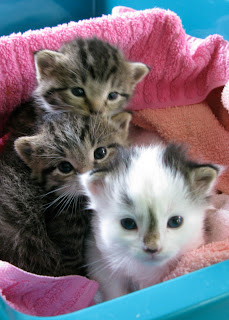 Many thanks to Dr. Brian Kersten, DVM and his staff at Baldwin Veterinary  Center in Baldwin, WI., for their continued support of the PAWS program and the lives they save! And, of course, for dealing with the momma cat, who was not too happy to be in a live trap!

Enjoy the journey of each and every day,
Sandy and The Herd with Violet, Vinnie, and Victor!