A Guardian Angel for PONY!

Every once in a while, a person comes into your life and leaves a mark on you. Now sometimes, the mark is painful. But if you are one of the lucky ones, your life will be sprinkled with the marks of people who leave smiles and peace behind them. People who made a difference in the world around them by caring. By giving of themselves. And by not really doing any of this good work for their own recognition.

This past week, Refuge Farms was blessed with the presence of such a positive life in our midst. You see, we came to know a Friend of THE FARM, Paige, a bit more this past week. Now, we've known Paige for the last three years. This young lady has been "one of us" and is seemingly growing right before our eyes.

The first year we met Paige, she was small - physically and in age. A young girl selling plants from her Mother's garden to raise money to help the horses. I was impressed by many aspects of that first visit. Not only the pleasant, shy smile of this young lady but also by the obvious and loving support of her Mother, Patricia, and her Father, Jason. They stood quietly in the back and allowed Paige to explain her mission and present her results to us.

The second year, Paige reappeared again. I was surprised, actually. Many times, projects are begun and the repetition and boredom with the work takes over. Sometimes we never see the young person again. But not Paige! Her goal was set a bit higher this year and once again, the plants were transplanted and sold for donations. This time they added a garage sale to bolster the bottom line. As Paige so politely put it, "We don't think we'll try that again!"

The third year, Paige appeared with her donation and a trunk full of blankets and de-wormer and tack. Her plant sale was publicized as a fundraiser for Refuge Farms and so a neighbor had donated some no longer wanted tack for Paige to add to her efforts. We have made good use of those winter blankets and the de-wormer was the top-dress kind - perfect for PONY! who detests anything placed in his mouth!

This year, on the July 4th holiday and during our public hours, I looked up to see someone that I knew I should recognize. The hair? Nope, didn't recognize that blonde hair. The height? Nope, this was a young lady now and she was taller than me! The eyes? Yup! I knew those eyes! Especially when she smiled and quietly said, "Hello." It was Paige! And how she had grown in the past year! 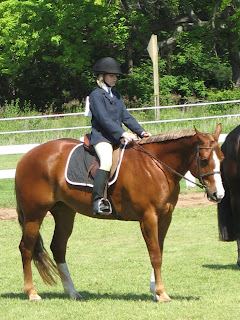 We talked of summer vacation and plans. We talked of her dedication to training and showing in English pleasure. And we talked of the horses at THE FARM. Patricia (Mother) and Jason (Father) were once again accompanying Paige and it struck me what a grand job they were doing raising this young lady. How polite and clear her conversation was with me. No unnecessary occurrences of "like" scattered into every sentence. Paige and I had an adult conversation while sitting in the barn last Monday afternoon.

It was time to go and so Paige hugged me good-bye. And then shyly handed me a Ziploc baggie. It was her proceeds from her plant sale this year. She wanted to give it to me and simply smiled and started walking - with her parents - back to their car. I looked at the bag. 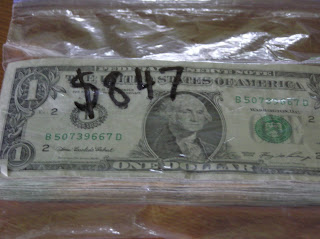 I asked her if she had time to come with me. Could I introduce her to someone? Not really giving her a chance to say no to me, I took Paige into the corral shelter and introduced her to PONY!. Standing in front of the fan, PONY! stood with his head protected in the corner. I removed his fly mask and said this to Paige:

"This is PONY!, Paige. He is blind in both eyes and his right eye has progressed nicely and doesn't bother him. His left eye, though, is another story. Do you see how swollen it is? How it is watering? And how he is squinting? Doesn't that look like that eye hurts, Paige?"

"We've had him examined and it is recommended that we remove this eye to relieve the pain. The estimate to do that is $800. Paige, with your permission, may I use your proceeds from your plant sale to remove PONY!'s eye? Are you alright with that? May I spend your money that way, Paige?"

Paige looked me straight in the eyes. "Yes, please do," she said. "I'm more than okay with that!"

And so it was. On the next morning at 9am, I called our Dr. Anne and told her the story of Paige, of the $847 baggie, and asked if PONY!'s pain could be relieved? Dr. Anne was positive it could be done. And so it was.

That very afternoon, PONY! arrived at the U of M Equine Center and on Wednesday morning, Dr. Anne Nicholson and Dr. Megan Swaab removed that painful left eye from PONY!'s face. The surgery went perfectly. PONY! was already more calm and more at ease. 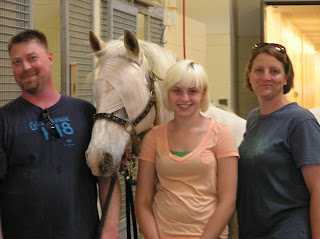 On Thursday afternoon, I met Paige, Patricia, and Jason at the U of M. We went to visit PONY! and Paige took him for a walk around the back barn. I stood and watched in amazement. The PONY! I knew would have head butted Paige all over the place! He would have been jerking his head and been very difficult to handle. But this PONY! Well, this horse was calm and even interested in the smells of the horses around him. What a difference the removal of that eye had made in this horse's disposition.

I hugged Paige as we parted. And lamely told her how grateful I was and how content and at ease PONY! seemed. My words fell woefully short of what my heart was screaming. You see, in my eyes, Paige is PONY!'s Guardian Angel. When PONY! needed help the most, Paige appeared and, with her hard works and determination, became the solution for that horse. She made it possible to improve the quality of that horse's life by transplanting plants in April to sell in June. Plants to sell to anyone who would listen. Just how many plants did that young lady have to transplant and sell to create a gift of $847? Just enough to make PONY! one happy, happy horse.

Paige - I've asked a few of the people who have met you to tell me what they think of this good work that you have done. Pam W. is one of our volunteers here at THE FARM and she was among the group when we announced your gift and our plans on July 4th. Pam says:

"Paige is a remarkable young lady. Her parents have done a marvelous job of raising her and instilling in her a wonderful, giving and caring knowledge that will take her far in life. It is something that is not often found in young people her age or even older. I guess I would have to even include adults in this feeling. I believe that this young woman will go far in life and will make a difference in what ever she decides to do when she grows up."

And then Tracy O. is also one of the volunteers present at THE FARM on July 4th. Tracy was the one crying right with me as I announced your gift. Tracy says:

"Paige is an incredibly impressive young lady in so many ways. She is so quiet and unassuming, yet year after year her hard work brings in even more results for THE FARM. That she continues to help others in such significant ways without external rewards says a great deal about her depth of character. I hope she can get publicity . . . so others can see the difference one person can make."

And then Dr. Anne of the U of M Equine Center said to me, as I told her the story of you, your project, and the hope to help PONY!, "I'm getting goose bumps listening to this!" Dr. Anne also wrote:

"I would like to add my thoughts on Paige: 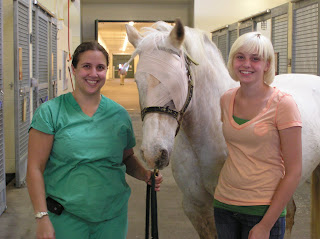 I am overjoyed that there are still mature young people in this world. It seems more often, I am exposed to spoiled, selfish kids who take everything for granted and only think about themselves, all while trying to get the privileges of adults without any of the responsibility. Paige is so different from that. She worked very hard and set goals that benefited animals in need versus her own wants. It is a refreshing honor to get to meet a young lady with such genuine selfless maturity. Thank you Paige, for having such honest and wholesome priorities; people like you make this world a better place." 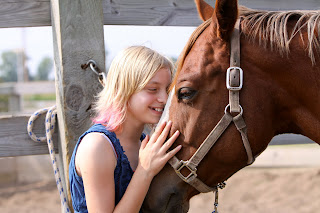 So there you have it. The true, real story of a young lady who set a goal. Who worked to prepare for her goal and then who set about achieving that goal. And with her hard work, this young lady has vastly improved the life of an animal in need. Paige made a difference in the life of a living creature from the giving of the goodness of her heart.

Thank you, Paige. Bless you - and your parents - for the goodness that you do. PONY! will lean his head on your shoulder when you see him next. Heck, he may even lick you a bit!

We all are the ones with the goose bumps now.

Enjoy the journey of each and every day,
Sandy and The Herd and a very, very happy PONY!