On Sunday, August 28th, some of the Friends and Family of Refuge Farms gathered here at THE FARM for a corn feed. It seems to be the start of a new tradition based upon an idea that was started by our Ole' Man Cole back in 2010.

Ole' Man Cole had crossed in the early months of 2010. During the winter months. He was buried close to the house and just west of the Andy Durco tree. And in the Spring, as we looked at his grave, the idea of a garden came about. Not a flower garden but a garden garden! A vegetable garden! How fitting that Cole would continue to give to us even after he had crossed over.

We grew beets and beans and radishes and onions. Even garlic. And the corn! The corn shot up high to the sky and tasseled beautifully. In a celebration of Ole' Man Cole, we decided to use his gift of this home grown corn for a corn feed. Let's all get together and eat the corn that Cole has given us!

It seemed as the corn matured, the community of raccoons held a meeting. They discussed their plans for feasting and someone in the group mentioned the new batch of corn over at Refuge Farms. The corn was on the edge of the garden, close to the road, and away from those huge watch dogs they call "horses". "Perfect!" the club of raccoons exclaimed. "Perfect! Let's go there to feast!"

And feast they did! Those raccoons visited each and every night and noisily ate Ole' Man Cole's corn. Even the stalks were devoured. All I can say is that Cole's corn must have been delicious to warrant that kind of work and dedication by those little creatures!

So, we were in a pickle. A corn feed was planned and we had no corn. A local farmer had a corn stand, however, and so Pam W. purchased the corn for our corn feed and we held the event, as planned.

Honestly, I don't remember what else was on the table that first year. I only remember that corn. Sweet. Juicy. Tender. I ate until I could not squeeze in another kernal. And I wasn't the only one! Others ate this sweet corn and exclaimed of its flavor and taste. Hence, the new tradition was begun.

So, on Sunday, August 28th, some of the Friends and Family of Refuge Farms gathered here at THE FARM for a corn feed. It seems to be the start of a new tradition based upon an idea that was started by our Ole' Man Cole back in 2010.

I asked people to arrive at noon and planned to eat around 1pm. I had secretive plans for the day. Something special to do and I wanted to share this something special with the guests at the corn feed. So, at 12:30pm, I gathered us all around a steel "contraption" in the yard. I had spent time the prior week to "plant" this steel piece in just the right place.

The hole had been dug and the rod had been set. Cement had been mixed and poured. Good, clean dirt had been used to top off the hardened cement and then the rod was painted to simulate a tree trunk. The steel piece was anchored to allow it to settle in over the winter months and all was ready. We had a new tree. 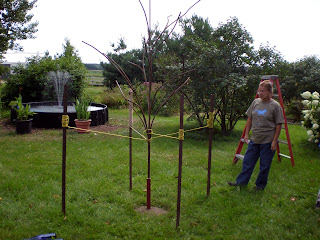 As we gathered around this newly "planted" tree, I explained that Blaise had crossed over on December 27th, 2010. Blaise had been Andy's horse. And I clearly remember the day we loaded Blaise and Cole into Andy's trailer down in Texas. Cole, the Walker, went with Andy and gave him a handful! Head butting, pushing, the Walker even tried to bite Andy! Andy muttered something to the horse about "respecting the one who is saving your life" but Cole continued to be rude.

Blaise, on the other hand, was the perfect horse. She came with me without even a tug. When I walked, she walked. When I stopped, she stopped. When I stepped up into the trailer, she stepped up into the trailer and quietly stood beside the moving, bellering horse she had shared a stall with for all those hungry months. Andy looked at me and nodded toward Blaise, saying, "Now there's a good mare."

I attributed this little mare's behavior to gratitude and the promise of feed. But, as I soon came to learn, the demeanor of this little Paint mare was one of obedience and politeness. Blaise was a retired rodeo horse and she seemed to live only to obey the humans around her. She blossomed under Andy's care and stuck tightly to Cole for the time they lived with Andy. Quick as lightning, I often wondered just how good a rider you had to be in order to stay in the saddle on that little mare!

As we stood by this iron tree, I told stories of Blaise and acknowledged, openly, that I hadn't realized how much I loved her and how much I had depended upon her until after she had crossed. The vacancy left by this little mare in that big barn is still felt today. Blaise was reliable. Steady. Trustworthy. True. And she tolerated any and all humans that wanted to touch her. I doubt we will be so fortunate to ever care for another as reliable as Blasie. 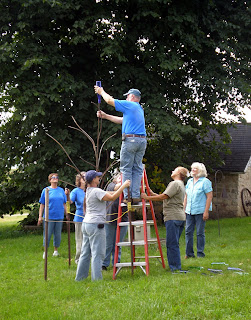 At the conclusion of my stories, I took a blue bottle and attempted to decorate Blaise's tree with it. I wanted my bottle to point to the sky! Up the ladder I went and stood there. I could not let go of the ladder to place the bottle. Helpless and unable to pay proper tribute to Blasie, Tom came to my rescue and placed my bottle for me. Forgive me, Blaise, for not being able to overcome my fears. I had prayed that just this once, I would not be fearful of heights. Just his once! I so very much wanted to place the bottle on you, Blaise, but my human weakness prevailed. I am unlike you, Blaise. I cannot be as true to you as you were to me.

Then others picked up bottles and told stories. Stories of Blaise. Stories of their own horses. Stories that - each one - reached out and touched you.

Vern told stories of the first horse he had purchased. How he had loved her. How she had lived with them for six years and he still adored her. You could hear it in his voice. The pride of her. The respect of her. And the missing of her. Vern, an admitted non-horse person, told the story of his first horse as he hung a bottle on Blaise's tree. 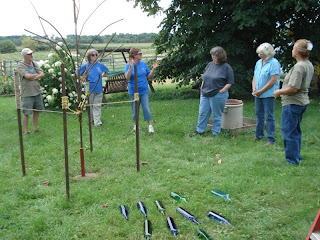 Blaise was a good teacher. She tolerated the new and the experienced. She had a way of adapting to the savviness of the human who was touching her. Blaise could move like fire and spin on a dime! Or she could stand perfectly still. Whatever was needed by the human who came to her for learning.

Anne walked between Blaise and the wall that day. And then, in a little while, Anne took Blaise on a lead rope out into the yard to eat some fresh grass. Blaise took Anne by the hand and taught her the beginnings of how to be with a horse. Anne's gratitude and appreciation poured out of her as her selected bottle was placed, with love, on Blaise's tree. 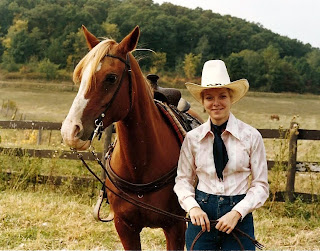 Julie began telling us of her mare, Alis Aden, aka Angel. A mare that she loved completely and wholly. Her heart is still soft over the loss of her and Julie still misses that mare. And so Tom, in support, continued the story of Angel and told of the two of them. How Angel and Julie both married Tom. And how their little pug dog would hang onto the tail of the horses as they came running in from the pastures! 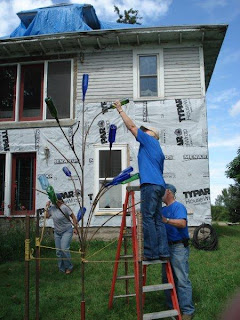 Tom told us of his mastery of horse training. His special skill, it seems, 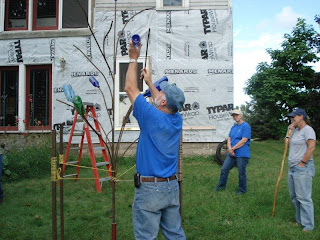 is the training of a horse to stand still while the owner mounts, slips off, and lands on the ground amid the horses feet. Tom's expertise worked well with his first horse. And his story did wonders with all of us. Reminding us of how much fun we have with our horses! How we laugh at the foolish things we try to do with them! And how tolerant and accepting these horses are of us humans. Tom's bottle was placed on Blaise's tree with smiles and appreciation.

As we adorned Blaise's tree, I looked around me. There were men who had sworn they didn't want anything to do with horses. And who now had horses "of their own". There were women who loved any and every horse. Regardless of age, shape, size, or condition. There were city people who were coming to love horses from deep, deep within themselves. And there were country people who had, perhaps, at one time taken horses for granted. They were learning a few things about themselves today as we all stood around this tree and told our stories.

There was the veterinarian who has dedicated his life to easing the burdens of the animals in his cares. And there was the rescuer who depended upon this veterinarian for guidance and wisdom. And yes, at times, for validation that what was being done was the right thing for this particular horse.

There was the businesswoman who worked so she could have her horses. And who privately rescues those that would otherwise fall between the cracks. There was the artist who really isn't an up-close-and-personal horse person but who shares her talents with us to help us save lives. And there were the professors. The learned. These people spoke of the lesson learned that day standing by Blaise's tree and hearing our stories. Life lessons. Taught by a tree of steel and decorated with colored bottles.

We ate and we talked even more. Then we shared dessert. Cakes to finish out the day.

The Beauty cake was in celebration of her 7th re-birthday. 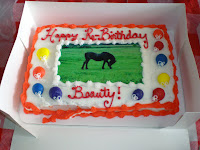 The day before had been Beauty's anniversary of arriving at Refuge Farms. A full seven years ago. And the woman who has fallen completely and totally in love with Beauty brought a cake - and even a re-birthday card! - to celebrate that milestone for her horse. 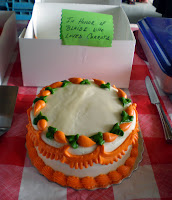 But Anne also brought another cake. A carrot cake. Decorated with numerous little carrots on the top. The note with this cake says it all:

"In honor of Blaise who loved carrots".

A simple tradition of eating the fall harvested corn. A tradition begun with Ole' Man Cole and continued with his stall mate, Blaise. A "contraption" of steel that became a tree and was decorated with colored bottles. Supported by stories of love and admiration and respect and laughter and grief and appreciation. Stories of our horses and how they have impacted us. Changed us. Brought us together. And let us bare ourselves to each other. And in that exposure, somehow, we take comfort. 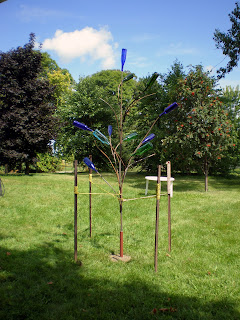 Thank you, Blaise, for once again teaching us. For once again being exactly what the humans around you needed. Your tree stands tall and it is sturdy and reliable and the wind will not break its branches. It is steady, as you are. It is true, as you are.

See you on the other side, girl. And I'll tell you once again what Andy said of you as I throw my arms around your neck. Now here's a good mare.

Enjoy the journey of each and every day,
Sandy and The Herd and Blaise's Tree