The Lessons of Faline, the Shire Mare

She came to us so very thin . . . her ribs sticking out like sharp "v" lines through her hide, her spine so easily visible and dangerously exposed, her butt checks with my hand width of air between them, and her neck so very thin - like a doughnut trying to support her enormous Shire head. I could not help but wince when looking at her. It was a cold November day when she stepped out of Auntie Trish's trailer and onto the gravel driveway of Refuge Farms. However she did not shiver. This was my first inclination that this girl was tough.

A member of our farrier's community had owned this mare for her entire life. She had served him well as a brood mare and a plow horse. Her large feet showed how sturdy she would be in the harness and her frame showed me that, hopefully, in her younger days, she had been full bodied and strong. But today, this little girl was bone thin, filthy, and puzzled. However, she was steady and confident and not the least bit intimidated as she held her head high and surveyed us all! I liked this girl from my first glimpse of her.

Those first three days, I watched her very closely. She did not eat grain. She did not drink out of the stock tank. And she did not come into the barn. Instead, she ate any snow that she could find and used the manure of the other horses to fill her tummy. And she simply stood outside with her hind quarters to the wind and her head down. This told me of her harsh life and her need to find water and nutrition in what had been available to her. Her own manure was very loose and did not have the usual healthy smell. I feared she was very close to death.

On the fourth day, I contacted the man who buries our horses and asked him to come and dig a hole for this new mare. I told him she was "way too thin and way too far gone to make it through the winter". The response was a practical response: digging a hole now only means the hole will freeze and we still won't be able to bury her. The advice I was given was good advice: "Just make sure she doesn't die until the grounds are soft."

Twice daily for every day for the next thirty days, I took this mare into the barn and tried to coax her to a feeder. It took all thirty days before I could get her to stand quietly at a bucket holder, but once that was accomplished, I then began the job of teaching her what feed was and presenting her with some once she stood at her designated spot. I needed to push feed pellets into her mouth and hope that some stuck - at least stuck long enough so that they would dissolve so she could taste the sweetness and perhaps want more. In less than a week, we had feed being carefully picked and consumed. And within a month, we had a mare who loved her feed! Now, she had a chance!

Water from a stock tank, however, was a different story. Whenever we made it to the tank, the horse she would see looking at her from inside that tank was enough to make her turn and run out of the barn! Seeing that her reflection startled her, I started bringing her water in a bucket. Again, within a week she would drink from a bucket and once she learned what joy that held, her daily waterings were anywhere from five to six buckets of water every morning and every evening! Water, like feed, was a wonderful thing!

It wasn't too long before this little girl was eating feed, drinking gallons and gallons of clear water from the stock tank, and beginning to mingle with the other horses. It would take time for this little mare to grow comfortable and "own" her space at Refuge Farms but she was still a tough mare. Not easily pushed around and certainly not one to spook or panic. This big shire mare was strong and steady as they come - and without a name.

It was deer hunting season and my first impression of her was of those big eyes of hers - enormous brown eyes that protruded from that skin-and-bones body. Given the season, I began calling her "Bambi". Within a couple of weeks, one of the Refuge Farms volunteers reminded me that Bambi was a buck and this horse was a mare - hardly appropriate. So, I asked someone to tell me what was the name of the "fairest doe in the forest" that Bambi chose as his companion? That doe was Faline, they told me. Hence, I later spent some private time with this mare and told her that we would call her "Faline" because she truly was the fairest mare in the barn.

It was November of 2012. For the next five plus years, this mare remained strong and steady - just as she was on that first day walking out of that trailer. She loved, loved, loved her feed! And after slurping up her feed, she would back out of her tie stall and lower the stock tank by a minimum of 4". Faline loved her water, as well.

After eating, she would find her favorite spot inside the barn and take a long nap. Not one to lie on the ground, this mare stood when sleeping and snored even while standing. Faline tolerated the hugs and kisses bestowed on her and welcomed the times she was brushed. Again, a new experience, she grew to love the feel of the bristles on her withers and would even lean into the person so they could get a better reach to her protruding spine.

In her years with us, we worked very hard but were never able to cover those ribs with any fat. It was my opinion that she just was so depleted that her body absorbed every calorie and used it to restore her inner organs. There were no excess calories to store! Only calories to try to restore the deficit. She had, after all, depleted all of her fat and so the calories we presented to her were swallowed and absorbed before she could even digest them!

On this brisk morning of January 27, 2017, our Faline was lying in the hay when I came to the barn for feeding. This was very unusual for her and so I went directly to her. She had been in the hay for a long period of time and she gave me no indication that she wanted to get out of the hay. But I knew a big horse cannot be down for long or they cannot rise. I prayed I was not too late.

We made two gallant attempts to raise that strong, long-legged body up off the earth. With each attempt, she would get herself to sitting on the ground on her butt - like a dog. I would let her rest and when she showed me signs of getting restless, then I would help her and ask her to stand. Her hind legs would not and could not get under her.

Two times we lifted her, waiting for her strength to gather, and two times she leaned forward as if to rise and I assisted her with ropes, collars, and the equipment. And two times, she simply went down onto her side and stayed there.

Dr. Rande was called and our beloved Faline was helped to cross at approximately 10:30am this morning - in the sun on a brisk January day.

What had happened? Something was amiss, I knew it. For three days this little mare that loved, loved, loved her feed ate very little of her feed. She drank only a few swallows. And her hind legs showed signs of oozing and a light trace of blood. I suspected her kidneys were going into failure and so I had called to schedule a blood sample be taken to confirm the kidneys and so, in that way, we would be prepared to support her journey onward.

However, this morning, Faline took control of her own destiny. In a quick examination, Dr. Rande could see a tumor that had penetrated the wall of her vagina. And truly, if there is one tumor there were many more in her body. Remember, too, this is the mare that had a tumor on her brain that was growing out of her left ear! For the last 18 months, I have checked the whites of her eye to see if she was in pain and for those last 18 months, we had treasured that ear as the growth caused it to be a horizontal ear rather than the usual vertical ear.

Faline crossed with the same bravery and strength as she had lived - no fear visible on the outside. No hesitation or spookiness. Only her face in the wind and held as high as she could manage while lying down.

Arriving November 12, 2012 and gracing our barn until January 27, 2017, Faline was a steady example to the new, frightened members of our herd. She did not pick fights. She did not require "territory". She did not push the smaller and weaker horses around. No, instead she simply worked her way to her tie stall, found a safe place to sleep, and waited her turn at the stock tank. 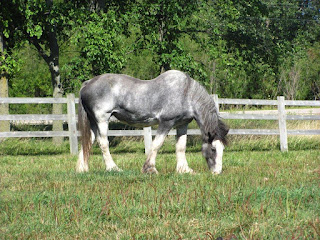 Faline was a compliant and considerate mare who lived each day in gratitude for the shelter from the winter winds, a love of her winter blanket that was honestly visible to her human, and a showing of pure joy at the feel of a fan in her face in July. She lived and taught us all about gratitude. And as her eyes failed and she learned to deal with total blindness, she taught us of tolerance and digging deep inside for strength. Many of us will remember her lessons and examples of kindness and joy from the presence of something as simple as clean water.

Today has been a difficult day. I could see she was beginning to struggle but I had asked her to try to hold on until she could eat the green grasses. But she knew better and so she chose to move toward today's sunshine rather than become weak and feeble and a burden. Strong and solid to the very last of her.

Faline, I love you enormously and am so very, very saddened at your crossing. I wanted to brush you in the warmth of the spring sunshine and take you into the yard for the sweetest grasses on this earth. I wanted to baby you a bit more with blankets and treats and hugs and kisses. And I wanted to keep you here, in this barn, just a bit longer.

But you, in your wisdom, knew I would never be satisfied and never be ready to let you go. I would always want just a little more time. A few more meals for you. And a few more days of warm sunshine. You knew that letting go is not easy and so you chose to move on and you did just that - in your own way on your own day.

May you find unending fields of sweet grass, streams bubbling with cool water, trees for shade, and a gentle breeze. And please, Dear Faline, get yourself to the front of the herd when I finally wander across that bridge myself. Please, Faline. I want to kiss your mustached muzzle one more time.

Enjoy the journey of each and every day,
Sandy and The Herd