The Story of Ella, the Rodeo Champion Penning Mare

It was 2005 and I was in the rescue barn seeking Duchess, a starved little wise mare who appeared on the front page of the Milwaukee Journal. As I walked past a front stall, I noticed a woman struggling with a stocky red mare who was NOT willing to have the needle placed in her neck. I offered to help and went into the stall uninvited   to assess, and hopefully help, the mare.

It became obvious that the needle was not an injection of antibiotics for the messy right side of her face but a catheter being inserted to “put this beast down”. Everyone was frustrated and getting angry – the mare, included.

With what little bit of history I could obtain, I asked the woman to wait while I contacted Dane County and inquired about the mare. Quickly, I connected and asked about the Foundation Quarter Mare. She was labeled “a killer” and was to be euthanized as treatment and handling was impossible. The mare was strong and in pain and panicked and thus deeming her dangerous.


“If you can hold her for 2 more days, I will return day after tomorrow to pick her up. And I’ll sign whatever I need to sign to document I understand she is “a killer” and potentially dangerous.” Those are the words I did not ponder. They simply came out of my mouth.


“She is not dangerous, Sandy. She is deadly.” was the response.

“Cool”, I said. “I’ll sign the paperwork. Just stop the process NOW. I’ll be back on Thursday to get her.”


With that, Ella, the Rodeo Champion Penning Mare came to Refuge Farms and received The Three Promises before her hooves touched the dirt of the driveway.


With her came an ugly wound where her right eye had been gouged out on “equipment”. The impact, we presume, caused the left eye to become blind. Instantly blindness was the new daily wear for this little mare of high intelligence and strength and instinctual desire to run to herd those cows!


In the summer of 2017, her right eye developed a growth that was removed and deemed to be cancer. From that point on, Ella was monitored very closely for any change in any eye tissue on either side.


In the winter of 2018-2019 on the morning of -47 degrees, as expected, Ella was outside the barn on the east side standing in the brutally cold sunshine waiting patiently for the feeling of heat. She had two winter blankets on her body and was warm underneath but the cold had done its damage – her left eye was a new yellow/gold color and the shape was not the usual round eyeball. Instantly, I knew that eyeball had frozen with the severe cold.


In just days, not knowing any of this history or the presence of Ella’s now frozen eyeball, Luanne Volk-Meinholz celebrated her birthday by opening a fundraiser for Refuge Farms on Facebook. In a note, I thanked Luanne and expressed my gratitude for the expansion of her love and support of her Beautiful Beauty and little Gracie-Girl to our Missions in general.

As I watched the generous support of Luanne’s friends and family, I again sent a note to Luanne asking her permission to use those funds to help support the costs of Ella’s upcoming surgery. Luanne’s response was, “Use the money wherever you need it most! Please do help that blind mare.”


Hence, the first 50% of our surgical costs for Ella’s surgery was received. Thank you, Luanne.


It was the time of our customary Spring Breakfast at the Menomonie Applebee’s and so I worked with Ella and her boyfriend, NewMan, and practiced walking down the driveway and into the big trailer. Ella was such a pro at loading and unloading that I soon saw that part of the event would be simple. And NewMan? Well, that little guy would follow his lovely Ella wherever she went. So I knew we could get to Applebee’s! But how would they react in the corral in the front yard of the restaurant?


Going to Applebee’s that morning was a bit tense. This was the first time NewMan was leaving his new home in eighteen months. And Ella! Ella had never left Refuge Farms in her fourteen years with us. And remember, Ella was still a stout mare with a huge neck and on very healthy, strong legs!


Nick and Brandon are good with horses with their even temperaments and their keen eyes for signals on the horses’ mindsets. Those two men stayed glued to the horses the entire time and Ella’s steps were spent looking for the gate in that little corral so she could get some space between she and NewMan. NewMan simply placed himself in the center of the corral and let Ella move around him. And around him.


At the end of the Annual Spring Breakfast at Applebee’s, we had the funding we needed to take Ella to surgery. The attendance by our supporters was the largest ever for a breakfast fundraiser! And some who could not attend the event sent donations specifically for Ella’s surgery. Now we waited simply for the weather to moderate and to get the surgery completed before the flies appeared! We were ready to go!


On Tuesday, June 18, 2019, Ella and NewMan loaded smoothly and rode the journey to Stillwater. They were placed in a single stall and quietly awaited the next move. Such calm displays of trust and security on their parts was not missed by me or many members of the barn crew. 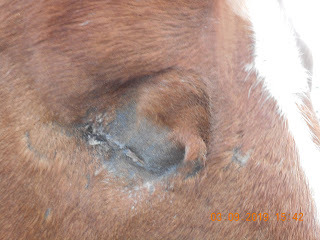 Ella's Right Eye Prior to Surgery

The plan was to open the right eye and search the tissue in that cavity to insure healthy tissue. If ANY unhealthy tissue was located, my orders were to “get it out”.


Then the surgeon would move to Ella's left eye. The plan was to remove Ella’s remaining eyeball and review the surrounding tissue to insure good health. Again, if ANY unhealthy tissue was located,


"get it out" was the directive.

The next morning, I arrived at Stillwater and dropped the trailer, paid the bill (in cash!), and then went to the stall to retrieve our couple. Quietly standing in the center of the stall, head to butt, they were dozing after munching their hay breakfast. Ella was a bit swollen and stitched but no oozing. I hugged her and she let me hold her head. Ella was weary and ready to go home.

Ella's prognosis is excellent! No sign of cancerous tissue was spotted in either eye! The right eye socket was “full of scar tissue”, which is understandable considering it was removed by a collision, not by a surgeon. And her left eye came out “cleanly”. Our girl is set for the rest of her life and will soon be running again in our pastures.

This first picture is a picture of her right eye after being reopened and inspected. No cosmetic surgery was completed. Ella has earned those scars and they are part of her history. Besides, Ella is beautiful to us, just as she is!


This is Ella's left eye which had the (frozen) eyeball removed. I will post pictures of her new pretty eyes after the swelling is down a bit more and the stitches are removed. We have three more days of penicillin shots – which she stands beautifully for, by the way! – and bute powder in her feed. Which disgusts her. We will pull stitches on July 2nd.


Many, many thanks to Luanne for the original fundraiser, to Robyn Feld and Marti Rooney for donations, and our  so very generous guests at the Annual Spring Breakfast at Applebee’s! Heather Kurth and her crew at the Menomonie Applebee’s were strong supporters again for us and this time, for Ella. It is only with this greatly appreciated support that we can keep this, Laddee's Promise, given to Ella:


You will be healthier here. Always considering the quality of your life, we will work diligently to restore your health. We will care for you. We will support you. We will love you. And we will medically treat you. It may not be possible to bring you all the way back to healthy, but we will work very hard to help your body and your spirit rebuild as much and for as long as you are able. You will be healthier here.